About Center for Studies of Marxist Social Theory(CSMST) 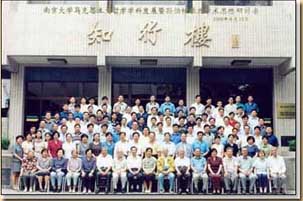 I. Modern Marxist Social Critique Theory Outside of China

The range and depth of research that has been done by CSMST on this topic has made the latter the authoritative academic institution on the subject within China. In the past years CSMST has made three major important contributions:

(1) Reform and Improvement of Research Methodology

CSMST has been one of the first Chinese institutions to specialize in the research of foreign Marxist theory and has significantly improved domestic research methodology for this subject. Research predominately focuses on Western Marxist Theory. The CSMST faculty early on realized that the available research methodology needed to be restructured and updated. Prior to the foundation of CSMST, current faculty members already started to develop a new methodology and their outstanding work is best exemplified by two articles published in the Fujian Forum (Issue 3, 2000) and Academic Research (Issue 4, 2001). CSMST scholars have gradually formed their own unique textual research methods and have taken research to a new qualitative level. Lukács and Marx (Nanjing University Press 1999) by Professor Bokui Sun and The Atonalistic Dialectic Imagination (SDX Joint Publishing Company 2001) by Professor Yibin Zhang are two more excellent examples of the exceptional quality of the CSMST faculty’s research work.

Previous Marxist research in China failed to keep track of post‑1970s development trends in international Marxist theory and, if at all, this subject matter was not researched in a scientifically systematic manner. CSMST was the first to initiate systematic research on this area and in its theoretical framework it has identified four general areas of post‑1970s developments in Western Marxist theory, i.e. Late Marxism, Post‑Marxism, Post‑Marxist Thoughts and Post‑modern Marxism (The Journal of Nanjing University (Issue 2, 2003). These four categories are considered important areas of future study and inquiry for the Chinese academia. To aid this effort, CSMST has published extensive translations of essential foreign works. The four‑volume Translation Series of Marxist Studies (China Renmin University Press, 2002), compiled by CSMST Professor Yiming Zheng, provides a vital literature resource for domestic researchers to acquire an understanding of new developments in Marxist theory abroad and enhance their own research. Consequently, pioneering research work, such as The Post‑Revolutionary Environment and Global Capitalism (Nanjing University Press 2002) by Professor Daping Hu, has made significant contributions to the newly identified areas.

Since start, CSMST has emphasized the importance of translating and introducting classics of Marxist theory from abroad to domestic scholars and its translation works are well acclaimed among the latter. The five‑volume Collection of Wataru Hiromatsu (Nanjing University Press), compiled by Professor Yi Bin Zhang, and The Making of the English Working Class (Jiangsu People’s Publishing House), translated by Professor Chengdan Qian, for the first time introduced modern Japanese Marxist Critique Theory and a classic of Great Britain’s Historic Marxist School‑two significant theoretical traditions previously unknown in China‑to domestic scholars. More than 80 works of foreign social theory have been translated and published, such as in the Modern Academic Prism Translation Series (Nanjing University Press) Modernist Studies Translation Series (The Commercial Press), and Translation Series of Culture and Communication (The Commercial Press).

This branch of theoretical analysis has a long history. Early works of indigenous Chinese Marxist Social Theory dating back to the 1960s, such as Materialistic Dialectic and Investigation by Professor Linyuan Liu and Practice is the Sole Criterion to Examine Truth by Professor Fuming Hu had significant theoretical influence on political leaders ranging from Chairman Mao to the reformers of the first Thought‑Liberation Movement in the early 1980s and laid part of the social theory foundation of China’s current and future leadership. CSMST researches how this social theory has developed in the post‑1980 era and examines what further improvements are necessary to keep it pertinent to China’s social reality and its future challenges. The contributions of CSMST to the theory can be placed in two major categories:

Faithful to the belief that reliable research has to be founded on the systematic examination of facts and eager to expand the frontiers of the theoretical framework, the CSMST faculty has formulated three clear research guidelines:

1. Fact‑Focused Research: The core of modern Chinese Marxist Social Theory has to be the recognition and discussion of the real social issues that have arisen in China’s reform era and the derivation of an adequate analytical framework.

2. Integration of Historic Theory Concepts: Modern Chinese Marxist Social Theory can be improved by assessing its historic origin and the latter’s historical context.

3. Synthesis of Philosophical and Political Analysis: The fundamental principles of Marxism remain the basis of Chinese Marxist Social Theory and it thus will have to be analyzed both from philosophical and political viewpoints.

Expansion of the Theoretical Framework

Assessing Marxist Social Critique Theory in and outside of China necessitates the diligent study of the fundamental Marxian works and the latter therefore is crucial to the academic pursuit of CSMST. Starting in the mid‑1970s, Professor Bokui Sun, who later would work at CSMST, researched this subject and did a substantial amount of fundamental work. In the early 1980s, he published Explore the Explorers’ Road in the early 1980s, analyzing the young Marx and Engels’ socioeconomic theory. His The Historical Text Analysis School in the Study of Marxist Socioeconomic Theory , is one of the pivotal publications of CSMST and a fine example of its pioneering research. In the recent three years, the CSMST faculty’s research has mainly focused on the following three areas:

With Professor Bokui Sun’s work as guiding force and qualitative standard, CSMST scholars, no matter what their individual specialization may be, carefully study fundamental Marxian socioeconomic analysis and theory. In 2001, Professor Sun and Professor Zhang compiled Approaching Karl Marx (Jiangsu People’s Publishing House 2001), a systematic exploration of the fundamental theory and methods in Marxian philosophy based on the original texts. The book won the 13th China Book Award in 2002. In the same line of research, Professor Zhang also wrote Back to Marx: A Philosophical Discourse in the Context of Economics (Jiangsu People’s Publishing House 1999) and Professor Zhengdong Tang contributed From Smith to Marx: The Historical Interpretation by Economic Philosophy Method (Nanjing University Press 2002). The latter book comprehensively explains the formation and development of Marxist Philosophy and many scholars regard it as one of the most profound studies on the Marxist socioeconomic theory in China.

An essential feature in the research methodology of CSMST is to focus on the actual text and determine what it attempts to convey. In China’s academia CSMST is among the first to discover the theoretical value of MEGA for research efforts. In the past three years, CSMST has pursued the thorough study of Part IV of MEGA2. By translating and interpreting the original content of Marx and Engels’ socioeconomic theory and reviewing comments by earlier Western scholars, this study tries to reveal the formation, development and present‑day value this socioeconomic theory.

(3) Relevance of Marxism in the Modern Era

Textual analysis of Marxian works is only as important as it manages to engage in dialogue with socioeconomic reality and derive pertinent theoretical models. This dialogue is another concern of CSMST’s work, as it tries to examine the relevance of Marxist theory in contemporary society. Professor Huaiyu Liu in Walking out of the Utopia of Historical Philosophy (Henan People’s Publishing House 2001) reflected in great depth on the evolution of Marxism through the last 150 years, Professor Kang Ouyang in Research Methods in Social Sciences (Wuhan University Press 2001) systematically evaluated various methods in the social sciences from a Marxist point of view, and Professor Zhen Han in Historical Philosophy: On Philosophical Interpretation of Historical Concepts (Yunnan People’s Publishing House 2001) reminds of the scientific value of historical materialism in the dialogue with the various schools of historical philosophy in China and the Western hemisphere.